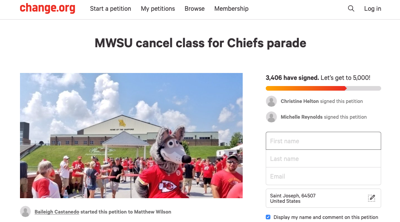 The Chiefs first Super Bowl win in 50 years has brought cause for celebration to many on campus as well as interest in the past and future of Chiefs training camp.

On Feb. 3, a petition was created by student Baileigh Castanedo with the goal of getting the campus to close for the Chiefs victory parade on Wednesday, Feb. 5.

Within a few days the petition reached 3,405 signatures. Campus remained open during the parade, creating a divide between professors on whether students should be required to come to class or not. Some professors postponed quizzes and planned on doing lectures that were easy to catch up on for those who missed. Others treated it as a regular school day.

Freshman and long-time Chiefs fan James Alberty was among the students who decided to attend the parade. Alberty said that it was not an easy choice deciding he should go, but in the end he was happy with his choice.

“When the president didn't cancel, I don't think he understood how when you have half your teachers telling you you can go to a parade and the other half telling you you can't go to a parade, it kind of puts the student in a very frustrating position,” Alberty said. “It's kind of ridiculous that even though they train at our college and so many of our residents are Chiefs fans that they wouldn't cancel for a Chiefs parade. I mean, why are we going to let them into our gym if we're not going to let the students go to the parade?”

As Alberty wondered why the president decided not to cancel, so did others who signed the petition. President Matt Wilson said several factors, such as accreditation requirements, went into the decision making process of not canceling classes.

Ellie Goulding not ready for kids

“One of the biggest things that I think some sometimes students and the excitement might overlook is that students take valuable money in exchange for classes,” Wilson said. “We've got students that are working two, three, sometimes four jobs so that they can get the knowledge that they need in the classrooms, and so that's something that we don't take lightly.”

The importance of this parade to the students ties directly into the university’s own past with the Chiefs training camp. The Chiefs contract to host training camp at Missouri Western was made in 2009 and lasted 10 years. At the present the contract has expired and it is still unclear whether the training camp will remain at campus.

The training camp facilities were created with the Chiefs’ needs in mind based off of what university staff observed at other training camps and Arrowhead Stadium. The camp saw a large increase in attendance this past year as the Chiefs’ rise to victory began.

Senior Associate Athletic Director of External Relations Brett Esely has worked closely with the training camp all 10 years, handling the majority of it’s day-to-day operations. This includes parking, tickets, sponsorships and a variety of other jobs. He has made many memories from his time working at the camp, including his son being born the first night training camp opened. Esely said there were many factors into whether the Chiefs would consider renewing a contract with the campus.

For now, there is no clear indicator of what will happen in the future between Missouri Western and the Chiefs, so all the campus can do is hope that the Chiefs have enjoyed their time here and choose to stay.